How it all started...

The first Sunday School was started in 1908 by Mr. J. N. Witter, who lived where Al Workman now lives. He was the grandfather of Dorcas Evich.

The Sunday School was first held in the Rome Grange Hall and continued there until 1913. Holding the services in the Grange Hall presented problems because it was often necessary to clean up the hall on Sunday morning from a party or basketball game the night before.

Mr. Beebe, who lived where the Murphy’s now live, offered the group the use of a shingle mill cookhouse, which was down along the creek. This building was used for a year and during this time plans were made to build a church building.

At about the same time a committee was appointed to draw up a constitution for Sunday School.

The first money for the new building was raised by the Ladies Aid Society. They gave a play which was held here and in Deming. The play was written and managed by Mrs. McWilliams, mother of Charlie McWilliams. Other money was raised by subscription and donation. This building was dedicated on the last Sunday of June 1914. However, a Sunday School with some preaching services had been operating for some years previously. The building dedication was conducted by the pastor of the Christian Church who came out and brought a large number of their members. The only person still at Rome who attended this event is Beryl Unger Breakey.

The first pastor of the church was a Rev. Hicky, a retired Christian Church minister. Another minister who preached here a number of times was Reverend Otto Williams, also of the First Christian Church of Bellingham.

For many years the First Christian Church would send a delegation out to Rome on Anniversary Sunday to assist with the music and put on the service.

About 1916 or 1917 the young people of the church took on the project of building on the side room addition. Later about 1926 a kitchen was built on the back, which became the platform. In 1940 Route 542 was widened and the highway department paid to have the church moved back and to the Northeast. Mr. Beebe donated the additional land necessary. A concrete foundation was built and the next year the concrete floor in the basement was poured. An additional strip of land was then purchased.

A number of pastors have preached here for various lengths of time. The first pastor which I remember was a Rev. Gilbert, who was a missionary to the Indians at Goshen. The next minister was Rev. Harry Richardson. Mrs. Edna Gish, formerly Whipple, preached here for a year, before going to China as a missionary. She is now retired and living with her sister in California.

Rev. Gill of the Christian and Missionary Alliance Church was here for a time. He was followed by Rev. Ted Goodwin who was here around 1929 and 1930. Rev. Karl Gilmer was here from about 1932 to 1942. He passed away several years ago.

Following Rev. Gilmer was Rev. Chester Rutledge. He was the pastor here from 1958. His wife taught a Sunday School class at the same time.

We have had many other ministers and missionaries speak to us over the years. Some have been here one Sunday and some for many Sundays. These have included, Grant Eldon Whipple, Doug Anderson, Muriel Lewis, Bob Slusher and many others.

Among the missionaries we have supported or had connection with was missionary Edna Whipple Gish who received her support from the First Christian Church of Bellingham. She was a missionary in China for many years. While she was there she had a Chinese boy that she looked after. She asked if this church would help support him while he attended Bible School. We sent $50 a year. He finished school and became a minister and helper in the mission. He later married and had a daughter. We continued to support him until all contact was lost during World War II.

Other missionaries we supported include Mrs. Abe Friesen who formerly was J. Slining, in Japan. We also contribute to the support of Wallace Bays in Victory High School in Alaska. Mary Odmark, who is now a regular attendee here was with Wycliffe Translators in Central Brazil.

In 1958 Rev. Rutledge suggested that we try to call a full time pastor. Through the Firs we got the name of Rev. Ellis Honaker. After some correspondence Rev. Honaker made a trip out here from Ohio in May, 1958, and after preaching a sermon, was given the call to come here. He moved here in July of 1958. We later enlarged the auditorium and included the kitchen in the platform.

Many people have come here and stayed and left their mark and moved on. It would be impossible name them all.

Rome Community Bible Church has a rich history in the community of Bellingham for over 100 years. We look back thankful for the Lord's faithfulness and now look expectantly all that the Lord will do until he comes again. 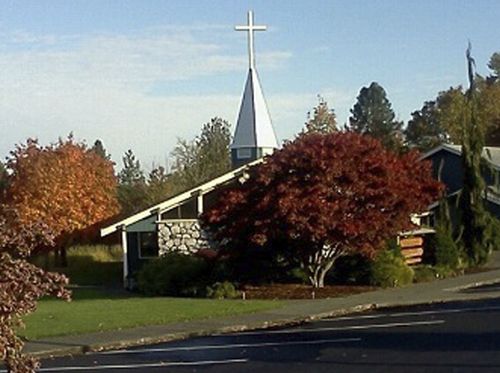 Where we are headed...

With RCBC's rich history there are many things in the past to celebrate. There are many lives changed, many families impacted, and many things to praise the Lord about. But we do not want to rest on one's laurels. As long as God has allowed RCBC to exist we want to steward his resource's in reaching the next generation. We do that through discipleship which then is shown through training and missions (local and global).

Join us every Sunday as we gather to worship together a 9:30 am and 11 am.